Assumption Parish of Our Lady Positano

The history of the Church of Our Lady of the Assumption is closely linked to the Benedictine monastery of St. Mary, which, according to oral tradition, was built when a Byzantine icon of the Virgin was brought to Positano and venerated in our church thereafter.

The abbey allegedly dates back to the second half of the 10h century. It was mentioned for the first time in a manuscript of the late 11th century, by which duke Sergio authorized abbot Mansone from the monastery of St. Mary in Positano to freely sail the sea of his dukedom.

The abbey had immense prestige until mid 15th century, when Antonio Acciappaccia from Sorrento, the last Benedictine abbot, and his monks left the monastery, maybe fearing the raids of the pirates from Cilento. Some years later, the monastery was entrusted to Nicola Miroballi, a commendatory abbot, who later became archbishop of Amalfi. Other commendatory abbots of Positano abbey were Federico Borromeo, one of the relatives of the famous Cardinal Borromeo mentioned by Manzoni, and cardinal Vincenzo Maria Orsini, who later became pope Benedict XIII.

The years of commendatory abbots was mostly negative for our church. Its architectural traces were almost totally lost, while the church started to fall into decay, in spite of continuous reproaches by Amalfi archbishops and a thorough rebuilding at the beginning of the 17th century.

The last commendatory abbot, Liborio Manna from Naples, was deprived of his power by the local clergy, which, in 1777, started restoring the church. The works lasted about five years: on 10th August 1783, archbishop Antonio Puoti, consecrated the restored church and he crowned the Virgin’s icon with a golden crown on 15th august. The Byzantine icon is likely to have been brought to Positano in the 12th century, by Benedictine monks who were sailing along the coast of Southern Italy, following trade and fishing routes. A little parchment in the parish archives remembers that in 1159 Giovanni II, archbishop of Amalfi, dedicated the church to the Holy Virgin. According to popular tradition, it was a miracle that the icon reached Positano.

It belonged to the cargo of a sailing ship from the East which, offshore Positano, was stopped by a dead calm. After unsuccessful attempts to continue sailing, the sailors heard a voice saying “Posa Posa”, that means, “Put me down, put me down!” (that’s the origin of the name “Positano”). The captain thought this miracle meant that the Virgin wanted to stop there and decided to head for shore. Right then, the ship began to sail again. The sailors disembarked the icon and gave it to the inhabitants of Positano, who chose the Virgin as their patron and built a church in her honor. The former patron of Positano was St. Vito martyr. His reliquary wooden bust (16th century) by the Neapolitan School, is one of the most valuable works of art in the Amalfi coast. His embossed silver head, thought to date back to the 15th century, is influenced by the Laureana’s school.

It was sculptured based on a living model (e.g., his ears look very natural). The Saint’s hair is falling in wide smooth locks, with a lively play of planes, his nose and chin are straight, his lips thin. The pupils of his slightly deep-set eyes are skillfully portrayed. The bust features conventional floral design on sand blasted background, with a jacket closed by fasteners, on the pleated collar shirt. The year “1599” is engraved on one of the fasteners. The words “SANTE VITE PROTECTOR POSITANI” , divided by a chalice and a Host, are engraved on the biggest fastener. On the bust lower edge visitors can read “REGE PHILIPPO TERCIO OPVS HOC COSTRVENDVM CVRARVNT SVMITIRVS CONFRATERNITATIS MONIIS CORPORIS CHRISTI GVRERNATORES EIVSDEM – HONORATVS PORCIVS A. ET. M. D. MARCVS AVRELIVS DVRSO SILVESTRO MIRELLA DOMINICVS REMITA E.P. MAX. CLEMENTE OTTAVO” (During the reign of Philip Ill, Clement Vlll being pope, the heads of the confraternity – Onorato Porzio, Marco Aurelio D’Urso, Silvestro Mirelli and Dominico Romito – ordered this work, which was funded by the confraternity). Nowadays the church, except for some works carried out in order to meet the requirements of the liturgical reform of the Second Vatican Council, still shows the marks of the restoration performed from 1777 to 1782.

The interior has a nave and two aisles, with five arches, corresponding, along the aisles, to five chapels on each side. When approaching the high altar from the entry, we may admire the chapels of St. Blaise, of the Immaculate Conception, of St. Anthony and St. Anne on the right. The altar of the Circumcision is on the right end, with a valuable painting by Fabrizio Santafede (1599). The chapel of St. Steven, on the right of the high altar, houses the wooden statue of Our Lady with Infant Christ. Above the high altar a small temple opens up with a recently restored Byzantine icon. On the apse sides, the walnut chorus features two niches, lodging Our Lady of Sorrows on the right and a valuable Christ at the column by Michele Trilocco (1798) on the left.

The chapel of the Blessed Sacrament is on the left of the high altar, while the altar of Our Lady of Mount Carmel, with a beautiful painting from the Chartreuse of Serra San Bruno in Calabria, is on the transept end. The chapels of the Crucifixion, of the Annunciation, of St. Vito and St. Nicholas from Bari are along the left aisle, towards the exit. In St. Nicholas’ Chapel we can admire a crib with original figures of 18th century. The choir with a majestic organ is above the central door. On the right, a small corner lodges a lovely baptismal font, restored by father Raffaele Talamo. On the right of the arch, the right aisle and the transept converge in a valuable bas-relief (maybe an ancient reliquary of St. Vito) dating back to 1506.

In front of it, a memorial stone of 1600 remembers Don Pirro Giovanni Campanile from Naples, appointed as a commendatory abbot of Positano. Above the stone, a bas-relief shows the abbot’s emblem. In the left nave, above the door, a painting, dating back to the late 16th century, portrays “the Body of Christ”. Some years ago, it was placed above the altar of father Blessed Sacrament, the former seat of the ancient Confraternity or Congregation of the Lord’s Body. In the parvis, near the church, the bell tower was built in 1707 by an unknown Capuchin friar, remembered in a stone fragment actually bricked up in the external church wall, along via Vito Savino. Above the bell tower door, a medieval bas-relief is bricked up, portraying a “pistrice” and, above it, a stone dating back to 1902 remembers Flavio Gioia from Positano, the inventor of the compass. 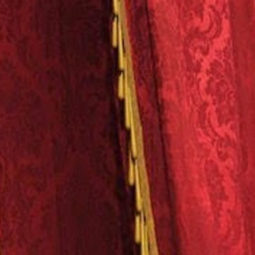 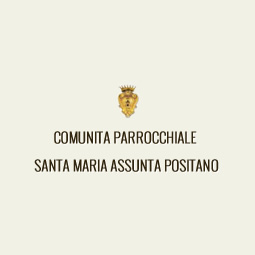 Petition to Our Lady Queen of Positano

The Archdiocese of Amalfi, directly dependent on the Holy See, has its seat at Amalfi, not far from Naples. 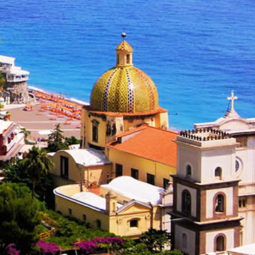